Breaking News: Criminals Break the Law to Get Guns

For all of the policy demands put forward by the gun control crowd, a new study conducted by one of their own confirms what other studies have found – criminals get their firearms illegally.

In a survey of 99 inmates in a Chicago-area jail, respondents overwhelmingly reported obtaining their firearms from family, friends or on the black market. Only 1.5 percent claimed they obtained their guns from a retailer. Other sources included stealing from gun retailers (NSSF matches ATF theft information reward offers] and thefts from houses in the neighborhood. 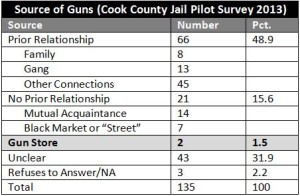 These results echo the findings of nation-wide government surveys of inmates, which have found roughly 80 percent of inmates obtained their firearms from family, friends or on the street.

Also acknowledged in the survey is the fact that the firearms identified by the Chicago inmates were overwhelmingly handguns, rather than the modern sporting rifles that anti-gun activists demonize.

With results like this, one has to wonder why gun control advocates are so focused on layering more regulations on law-abiding retailers, requiring background checks for private party transactions (which the criminals are sure to ignore) and banning modern sporting rifles, rather than focusing on enhancing law enforcement efforts to make sure the laws in place are strictly enforced.