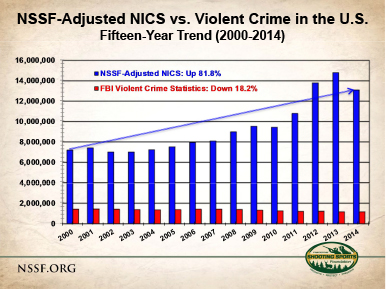 Homicides with firearms in 2014 were down 3.9 percent on a year-over-year basis. Consistent with previous years of this ongoing work, the vast majority of these murders were committed with handguns, although all categories of gun murders were lower. Rifles of all kinds were involved in just 3 percent of gun murders in 2014, lower than the number of deaths attributable to knives, blunt objects, and even fists or feet.

While the one-year numbers may not look that dramatic, they are nonetheless important because they serve to illustrate the long-term, 20-year downward trend in crime in the United States is continuing.

Using NSSF-adjusted National Instant Criminal Background Check System (NICS) data over a ten-year period since 2005, the best proxy we have for firearms sales, we see a 74.1 percent increase in background checks even as the violent crime fell 16.2 percent. The 15-year trend is even more dramatic, showing an 81.8 percent increase in NICS numbers even as violent crime fell 18.2 percent.

Put simply, more firearms in the hands of the mostly law-abiding American population have not yielded an increase in crime.

Not seeing much (or any) mainstream news coverage of the newly released crime stats? Well, we’re not surprised and if you read our blog on even a periodic basis, it’s no surprise to you either. We’ve covered this topic before. In fact, the motion infographic that we released more than a year ago, remains accurate in content and direction.

The gun control lobby gets considerable attention for arguing that there is an “epidemic of gun violence” extant in the land. Every death due to the criminal misuse of a firearm is a tragedy. We would never suggest otherwise. But two decades of a steady, dramatic decrease in such crimes is the opposite of an epidemic. It would be nice if the mainstream media would report on these facts.