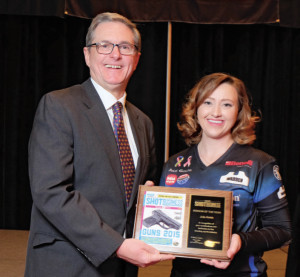 Each year at SHOT Show®, NSSF’s trade publication SHOT Business recognizes those in the firearms industry who work the most diligently to promote NSSF’s programs and support our mission of promoting, protecting and preserving hunting and the shooting sports. We believe NSSF members are the ones who know best who these outstanding representatives of our industry are, and so this year we are asking you to nominate these best-in-class business partners.

To thank members for participating in these nominations, NSSF will award one lucky voter a complimentary first-class hotel stay on the Las Vegas Strip during the dates of the 2016 SHOT Show, January 19–22 (approximate retail value $1,350.00). The drawing is open to all NSSF membership classes. Limit one (1) nomination ballot per NSSF member during drawing period.

This special contest opens today, June 15 and runs through September 15, 2015 to allow enough time for every NSSF member to tell us their stories of colleagues doing great work to promote NSSF’s mission during 2015. The winner of the first-class hotel stay will be randomly selected from all eligible entries after September 15, 2015. See complete drawing rules here.

Don’t let this chance for your voice to be heard pass you by. Cast your vote here and we’ll see all of you in Vegas!