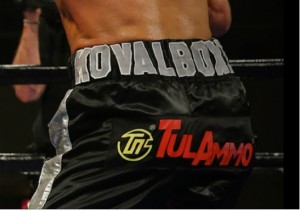 Now, as he prepares for his biggest fight to-date, and first in Las Vegas, his sponsors have told NSSF that HBO is demanding Kovalev remove the logo of Tulammo USA, a Round Rock, Texas-based ammo manufacturing company, from his boxing trunks. Kovalev has not made a public response, but his relationship with the company is a close one. The fighter appeared at Tulammo’s SHOT Show booth this past January.

This isn’t the first time a network has taken a punch at gun companies. Last year, Daniel Defense wasn’t allowed to purchase advertisement time during the Super Bowl despite complying with NFL policies. And again in 2012 FOX Sports Media Group banned advertisements featuring firearms and ammunition from its coverage of Ultimate Fighting Championship (UFC) events.

Now, HBO seems to have decided to use the sporting arena as stage for a political debate. TV networks are certainly free to decide what they broadcast, but the typical daily HBO fare of murder, mayhem and the glorified misuse of firearms suggests a certain degree of hypocrisy in HBO’s reported decision to ban the simple logo of a company that manufactures ammunition. It is strange that a media company such as HBO has decided to infringe on the First Amendment rights of the boxer and Tulammo by censoring what can be printed on a pair of trunks. The network is known for sometimes-violent programming such as True Detective, The Wire and The Sopranos (which coincidently featured a handgun in its logo). Would HBO have the same inclination to censor any of their show writers or their famous talking head Bill Maher. Would they dare censor their content for political reasons?

In the fight of HBO vs. Tulammo we won’t know the victor until Kovalev appears Saturday night. But a decision by HBO to ban advertisements for lawful products is, in boxing terms, ‘a low blow,’ and we suggest that the network just as soon ‘throw in the towel.’