I guess that Connecticut Gov. Dannel Malloy must have missed us. 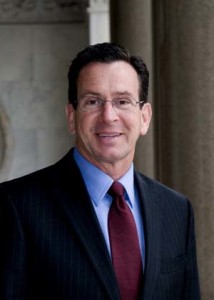 And by “missed us”, I mean he missed making up stuff about us or either pretending he doesn’t know much about the firearms industry that has such a significant presence in his state or is so uneducated about federal and state law that it should be embarrassing.

Mind you, this is the Governor that attacked the firearms industry in 2013 rhetorically asking and answering his own loaded question with CNN’s Candy Crowley, “What this is about is the ability of the gun industry to sell as many guns to as many people as possible – even if they are deranged, even if they are mentally ill, even if they have a criminal background,” Malloy said. “They don’t care. They want to sell guns.”  We asked for an apology.  Connecticut-based O.F. Mossberg asked for an apology on behalf of its state workforce.  We’re still waiting.

Malloy picked up the old theme in a superficially more reasonable sounding way on June 2 at an evening roundtable discussion of an interfaith group asking “For a generation, we’ve been hearing that it’s not guns that kill people, it’s people that kill people,” Malloy said. “If that’s the case, then the gun industry has an obligation to tell us what they’re doing to keep guns out of the hands of people who shouldn’t have them.”

The Governor’s staff announced the meeting a few hours before it occurred and there was much discussion there about questions that should be asked of the industry.  We were not invited despite being the subject of such great interest. Of course, we would be more than happy to answer the Governor’s questions at any time, but our repeated attempts to meet even with the Governor’s top public safety official have gone unanswered. Our April 15 request was the latest.

As for the Governor, as we said with purposeful understatement on that roundtable meeting day after we were informed by four different state house reporters of said pending event, “We rather suspect that the Governor sees a political advantage in publicly sparring with the firearms industry, rather than really bringing us into a conversation.” Read our statement.

Even if we are someday granted a meeting, we likely wouldn’t change our statement. Malloy clearly sees a firearms industry straw man as politically expeditious in appealing to his base in an election year. What we’re happy to report is that the state press corps seems to have figured this out, the Governor’s meeting and remarks not generating nearly as much media coverage as we’re sure he hoped for.  In the stories by the veteran political reporters, we were given our due.

This transparent political ploy also appeared to motivate one of the reporters to check in on Stag Arms, to see how that Connecticut Modern Sporting Rifle manufacturer was faring under the restrictive Connecticut anti-gun regime.  He took the opportunity to point out that the Governor was visiting a nearby company, but had no intention of stopping in at Stag Arms.

Here’s the bottom line. The firearms industry already does most of what the governor says he wants to learn more about. What we will not do, however, is to be put into play for his political purposes.  And we will, to borrow a phrase from the liberal playbook, speak truth to power. We’re happy to do that across a conference room table, or as the Governor seems to prefer, in the media.