While Media Chase “Fear” Narrative; Americans Make their Own Decisions on Buying Firearms 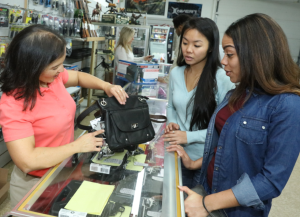 Mainstream media always struggle to explain the fact that Americans choose to exercise their Second Amendment rights.  In the last few days alone we have headlines suggesting the incoming Trump Administration and fear of hate crimes are behind soaring gun sales.

Under the Obama Administration, gun sales surged. The media’s take: nutty people who already have guns are buying even more guns because they are scared Obama will take away their right to buy more in the future.

Now that President-elect Trump is getting set to take office, gun sales continue to rise. Only now, the media cannot blame the fear of the nation’s gun owners. Instead, they are chasing the fear narrative in the other direction.

Media outlets are now taking a look at the demographics of those choosing to legally purchase firearms and are seeing for the first time the trends that have been evident for years now. The ongoing trends of more ethnic diversity and increasing female participation are clear to anyone in the industry. For example, NSSF research has shown previously that new target shooters are more likely than those who have been shooting for more than 5 years to be younger, female and residents of urban or suburban areas.

The increasingly diverse consumer base for firearms has shown up in recent polling as well. An ABC News poll released in April found that millennial women rate “protecting gun rights” as an issue of concern on the same level as equal pay and abortion.

The trends in market diversity and in public opinion polls are also reflected in concealed carry permits. In July 2016, the Crime Prevention Research Center analyzed concealed-carry permits and found that from 2007-2015, permits issued to nonwhite Americans increased about 75 percent faster than those issued by state and local governments to white Americans. Note, this was before Donald Trump won the election. The analysis also found that in the states that report permit data by gender, “since 2012 the number of permits has increased by 161 percent for women and by 85 percent for men.”

It’s time for the mainstream media to let go of the boogey-man hunt and acknowledge an increasingly broad range of Americans choose to legally purchase firearms for self-protection, hunting or sport.

If U.S. senators were hoping to give a lift to the Department of Justice’s proposed rule to redefine a firearm, they underestimated Ashley Hlebinsky. She’s…Read More

Gun Control Spends Bigly. What Are They Buying?