The 2016 NSSF Industry Summit, which attracted industry professionals from across the country to Pittsburgh June 6-8, is garnering high praise for the impactful information it delivered to attendees to help them grow their businesses and participation in hunting and the shooting sports.

Attendance by nearly 250 industry leaders was second only to last year’s Summit in Savannah, Georgia, and attests to the continuing value of annual Industry Summits, which have led to the development of many successful programs and initiatives benefitting the future of firearms ownership, hunting and target shooting.

The Summit provided valuable content for all segments of the industry — from manufacturers to retailers to shooting ranges to natural resource agencies to hunting and conservation groups — and continued a theme begun last year on how best to engage with diverse audiences. NSSF research reveals that many ethnic groups, including the large U.S. Hispanic population, have an interest in learning about firearms ownership and the shooting sports.

I believe the 2016 Summit has set a new standard for offering sessions that appealed to all segments of our industry and that will motivate individuals, companies and organizations to improve and make meaningful changes to help ensure a healthy future for our industry and firearms-related sports.

The Summit kicked off with a welcome from NSSF President Steve Sanetti followed by presenters Tara Jaye Frank on “Culture as a Pathway to Innovation” and Gerry Loredo on “Engaging the Multi-Cultural Target Shooting Audience.” Both stressed that hunting and target shooting appeal to nearly all groups but that understanding a group’s culture and needs will make introductions to the shooting sports much easier.

Retailer marketing was a key Summit focus, with retailing guru and author Paco Underhill explaining “The Science of Shopping,” followed up by valuable market research provided by Jim Curcuruto, NSSF Director of Industry Research and Analysis, and Rob Southwick of the research firm Southwick Associates.

A high point of audience engagement was a panel on how to fight the culture war on hunting, moderated by National Deer Alliance President Nick Pinizzotto and featuring Georgia Director of Wildlife Resources Division Dan Forster, Vista Outdoor Director of Conservation and Public Policy Ryan Bronson and Media Lodge CEO Jeff Siegel. Next up was a presentation by David Mead on “Start With Why” that clearly resonated with attendees.

Day two of the Summit featured two headliner presentations, with the main meeting room packed for a discussion on industry trends, insights and concerns by a panel of four high-profile industry leaders — James Debney of Smith & Wesson, Steve Hornady of Hornady Manufacturing, Chris Killoy of Sturm Ruger and Bruce Pettet of Leupold.

The Summit wrapped up appropriately with a motivational keynote speech given by Pittsburgh Pirates Manager Clint Hurdle, who encouraged personal responsibility, continued self-improvement and respect for others. “Be where your feet are,” urged Hurdle.

Two well-received sessions on the important but challenging topic of working with media on firearms issues were given by journalist and author Frank Miniter and Cheryl Todd of Gun Freedom Radio. Breakout sessions focused on marketing, NSSF’s #GUNVOTE campaign and NSSF’s Firearms Industry Health Advantage.

Summit attendees enjoyed an opening reception at riverfront PNC Park, home of the Pittsburgh Pirates major league baseball team, and the city also demonstrated its commitment to helping promote firearms safety. At a pre-Summit press conference, the Allegheny County Sheriff’s Office and Pittsburgh Bureau of Police announced a partnership with NSSF’s Project ChildSafe program to provide free gun locks to residents and encourage secure storage of firearms when not in use to help keep guns out of the wrong hands.

View more images of the 2016 NSSF Industry Summit on Flickr. 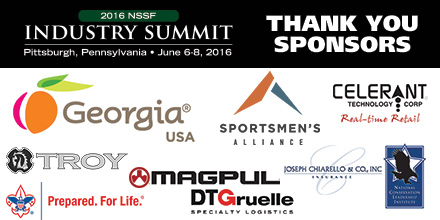