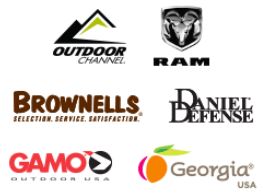 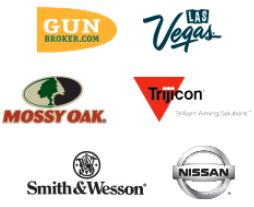 The success of the 2015 SHOT Show was due in great part to the many dedicated industry sponsors that contributed generously in support of the firearm industry’s largest trade show. For many of our sponsors, this was not the first time they have stepped up to the plate.

Outdoor Channel made a remarkable fifth consecutive appearance as one of the show’s top sponsors, demonstrating unwavering commitment to the industry, as did Ram Trucks, returning for the third straight year as another top sponsor, its hunt-worthy vehicles on display garnering tremendous attention from the show’s 62,000 attendees.

Daniel Defense came back with strong support for the third year in a row. Not only did everyone staying in the Palazzo and Venetian have a room key sponsored by Daniel Defense, the company was the sole sponsor of the SHOT Show Mobile app and contributed to many other aspects of the show.

GunBroker.com continued to be an extraordinary partner of NSSF and the SHOT Show, again sponsoring the NSSF Member Lounge and Business Center. Nissan also returned, sponsoring the 2015 SHOT Show Press Room for the second year in the row. Both are great examples of companies making the extra effort to help our industry thrive.

Other important sponsors returning to support the 2015 SHOT Show included Brownell’s, Gamo Outdoor USA, the Georgia Department of Economic Development, Mossy Oak, Trijicon, Smith & Wesson and the Las Vegas Convention and Visitors Authority, among others, and NSSF offers many thanks to each and every one of them. Their support is invaluable to ensuring the continued success of the SHOT Show and NSSF’s mission of promoting, protecting and preserving hunting and the shooting sports.

Chris Dolnack is Senior Vice President and Chief Marketing Officer for the National Shooting Sports Foundation. Follow him on Twitter at @ChrisDolnack.