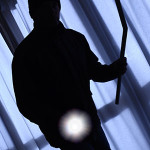 Previously I talked about some of the things you can do to avoid your store becoming a burglary target. Most people immediately think alarms and solid locks when this subject comes up, but there are many more facets to this topic to consider. Let’s continue.

Burglars seek out dark stores. A best practice with today’s technology is to integrate your lighting system with your alarm system so that when the burglar alarm sounds the entire store lights up automatically via a relay system. This instantly provides visibility to the public outside and responding police, and it also supports efficient recording by your video security cameras. Outdoor lighting is also a way to deter a burglary situation, keeping rear areas, storefronts and emergency exit areas illuminated after hours. Consider, too, installing lights that have heat-tempered lenses, as these cannot be broken or defeated easily.

Don’t get caught up in reinforcing only your store’s perimeter and access points. The most prevalent burglary activity we see these days are the smash-and-grab occurrences whereby a stolen vehicle is used to smash through the front or rear doors of a firearm retailer and the assailants then quickly use hammers, rocks and other heavy objects to smash interior showcases where guns have been left “secured” overnight. Such smash-and-grab burglaries can take as little as two to three minutes from start to finish. That means it’s essential that you also take steps to secure such displays or otherwise secure their inventory in less vulnerable storage.

Showcases can be built with burglar-resistant security locking devices, laminated glass or glass that’s been reinforced with security film. One of NSSF’s Member Benefits companies provides rolltop security guards for glass display cases that are nearly impenetrable. Even with any or all of these safeguards in place, I would still strongly recommended that handguns, the primary target of break-ins, be removed from showcases nightly and stored behind high-security stockroom doors (with deadbolts or three-point locking systems) or in gun safes. If possible, long guns should be either removed from the selling floor or secured with locking mechanisms in their racks after hours. If you choose to go to the trouble of locking your firearms in safes each night, safes weighing less than 1,000 pounds should be properly mounted to floors or walls where possible to prevent removal of the entire safe and its contents. 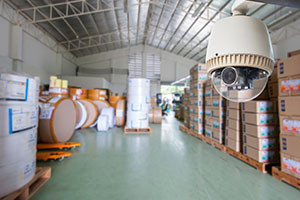 Your stockroom walls need special attention. Several gun shops in recent memory reported that individuals gained entry by breaking through the neighboring wall of another business or in-store room where drywall was the only barrier in between. For the room where firearms inventory are stored where the walls are not exterior brick or concrete, half-inch plywood can be installed on the interior of your drywall to prevent easy access. Interior drop-down gates are also an option, and vibration alarm sensors can be installed to detect early warnings of smash through attempts.

Although handguns are usually the primary target in a gun shop burglary, all monies received should be deposited nightly. Cash register funds and petty cash should also be secured in a safe intended for such purposes. Locking operating cash and daily receipts in a file cabinet office draw just do not make sense. Make it a regular practice to remove register funds from cash drawers nightly.

A very visible and updated security camera system is advised for several reasons, including tracking of burglary activates, evidence of criminals casing your store for a future crime, robbery deterrence and burglary investigation. Video is always used to investigate and prosecute criminals in a variety of criminal activities that may occur on your premises. Modern security camera systems utilize a digital video recording (DVR) system or record via remote connections over the Internet to a monitoring service. 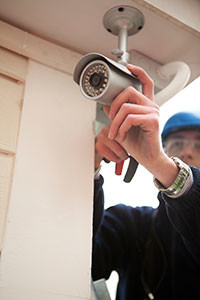 Researching the right security camera system can easily be completed on the Internet or in discussion with a security camera installer. Installation planning involves selecting the appropriate camera technology, lighting requirements for reliable recording in darkness, recording capacity, frame recording settings, digital recording unit storage capacity and proper camera placement to ensure recording of relevant individuals and activities. Setting the recording unit to properly record in real time when activity occurs in the middle of the night is also important.

A best practice when installing a camera system is to first think through the many scenarios of a burglary team and then locate cameras in all pertinent areas of the store to capture information that would help successfully prosecute the perpetrators later. Self-installation is possible in smaller store footprints, but professional installation is recommended in larger establishments to ensure technology, coverage, recording and programming are appropriate. Finally, it is advisable to secure the recording unit for the security camera system in a tamper- and theft-proof area of your store.

Canine watchdog patrols are not as common as they were years ago, but I am seeing a comeback in this type of service in higher crime and metropolitan areas. The dogs are specially trained for the purpose of preventing burglaries and criminal activities in high-value premises, and word gets around pretty quickly to the local criminal element that your premises is guarded by canines.

Private police or security patrols can also be used to supplement the public police force, especially when such is undermanned and overworked, as often happens in high-crime areas. In addition to serving as a criminal deterrent, private patrol can also be a backup to your internal security programs, identifying unlocked doors during routine inspections and responding quickly to alarm calls. When contracting with a patrol service, be sure that their guards are qualified to testify on behalf of your store for any crimes or investigations they may be involved in.

Security can be what you make of it, but when it comes to firearms in today’s society, more is better. Not only is this about your livelihood, but also about matters of public safety and responsibility. You owe it to you, your customers and the public to do everything you can to prevent the theft of firearms from your store.

You may also be interested in: Building Security From the Ground Up