A recent Pew Research Center survey found that law enforcement officers overwhelmingly say it is more important to protect the rights of Americans to own guns than it is to control gun ownership. By a margin of 3-1, officers supported rights over gun control (74 percent to 25 percent). 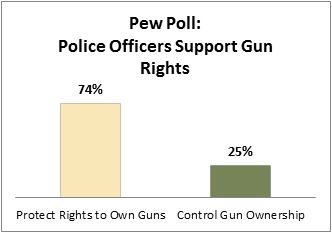 When it comes to proposals to ban modern sporting rifles, more than one-third of officers, 67 percent, oppose a ban. Only 32 percent said they support a ban on so-called “assault-style weapons.”

This opposition echoes the findings of earlier surveys. In one poll, conducted in March 2013 by PoliceOne, 71 percent of officers polled said that a ban on so-called assault weapons would have no effect on reducing violent crime. 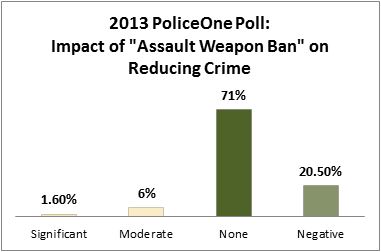 Despite the significant support for gun rights among law enforcement officers, all too often we see gun control groups arguing that law-abiding Americans exercising their Second Amendment rights are a danger to officers. It’s truly fitting that this poll is released the day after a legally-armed citizen saved the life of a state trooper in Arizona by shooting an individual who had ambushed the trooper. It is no surprise that officers themselves care more about what they see every day (like concealed carry permit holders helping prevent criminals from hurting or killing others) than they do about manufactured stats of these anti-gun groups.