What you Find When You Unpack Mrs. Clinton’s ‘Basket’ 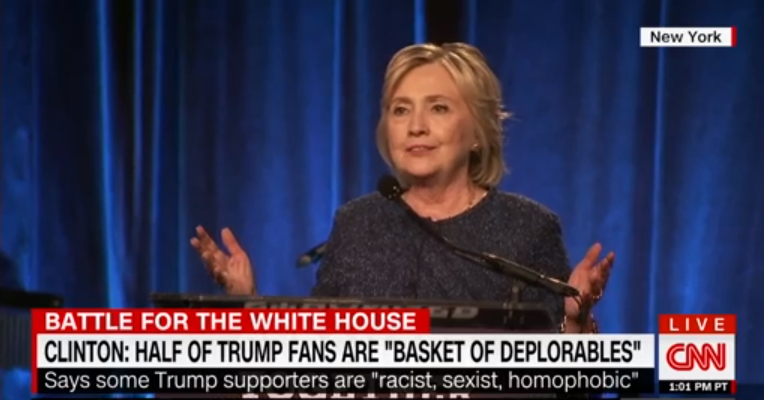 In what Hillary Clinton only half apologized for as a “grossly generalistic” (sic) characterization of half of Republican Presidential Nominee Donald Trump’s supporters as “a basket of deplorables” that received so much media attention over this past weekend, we hear both a genuine elitist attitude toward Americans and a familiar political echo.

On attitude, let’s just observe that like so many political elitists, Mrs. Clinton believes that if people oppose a policy or even have the temerity to question whether that policy is best for our country, then they deserve to be labeled as believers in a particular “…ism” or victims of this or that “…phobia.” At best, those people deserve to be pitied because they don’t understand the forces around them and are lashing out (indeed, that was the other half of Hillary’s rhetorical basket, both originally and in her apology). These views play well to the liberal support base.

We believe Mrs. Clinton would gladly place “gun owners” into her “basket of deplorables.” She has all but done so before and we have written recently how Mrs. Clinton has backed away from the gun control rhetoric of the primary season now that she must appeal to more general election voters. About the Democratic vehemently pro-gun-control platform, she is now largely silent.

As we enter the two-month countdown to Nov. 8, we are reminded of 2008 presidential candidate Barack Obama’s similar lecturing remarks to some of his supporters about Americans who feel bitter and turn to “God, guns and have antipathy toward people who aren’t like them” to make themselves feel better. The then Democratic standard bearer had to apologize for that remark, too. But, there’s no evidence he ever stopped believing it.

So, as you consider the candidates and their records before you cast your ballots, take a look at their expressed attitudes and their often very telling apologies. The past does not have to be prologue. Do your own research.