A recent study published in the American Journal of Public Health makes the spurious claim that Connecticut’s 10-year old handgun permit-to-purchase law kept the state’s firearms homicide rates (FHRs) lower than it otherwise would have been. To get to this unfounded conclusion, the authors, all from the anti-gun Bloomberg School of Public Health at Johns Hopkins University, created a set of assumptions that perfectly match their desired conclusion, cherry-picked years and fished for convenient variables.

While it is well documented that homicides with firearms have fortunately been on a steady decline nationwide over the past decade, the authors use a weak research design to compare Connecticut’s actual post-1995 FHRs with what they claim is an estimate of what those rates would have been in a hypothetical situation of the state not passing the handgun law.

Without even looking at the study design, it is wildly implausible to argue that one fairly modest change in law was solely responsible for a 40 percent decrease in FHRs. The law included changes like requiring prospective handgun buyers to appear in person to apply for a permit and requiring completion of a handgun safety course. These are not laws that criminals follow.

While flawed, the study’s design is simple. Use FHRs in other “control states,” as well as control variables thought to affect homicide rates to predict what Connecticut’s rates would have looked like if the law were not enacted. Then the authors compare Connecticut’s actual rate with the rate predicted by their model for their “synthetic Connecticut” and attribute any difference to the “effect” of the handgun permit law.

The key issue is whether the law caused the rate drops, or whether some combination of a host of other causal factors was instead responsible.  The authors acknowledge that their research strategy depends on an assumption that no other factors could have contributed to the drop, but fail to mention how extremely implausible this assumption is.  It’s safe to say there were certainly other homicide-affecting factors changing in the post-law period beside the gun law revisions.

The most conspicuous way that the authors distorted their findings was by arbitrarily excluding data points for 2006-2013, which tend to contradict their claim that the law reduced FHRs. As our chart here shows, the authors extended their time series just far enough to include the unusually low rate post-law years of 2002-2005, but excluded the eight post-law years of 2006-2013 in which the rates were on average 41% higher than in the 2002-2005 period. 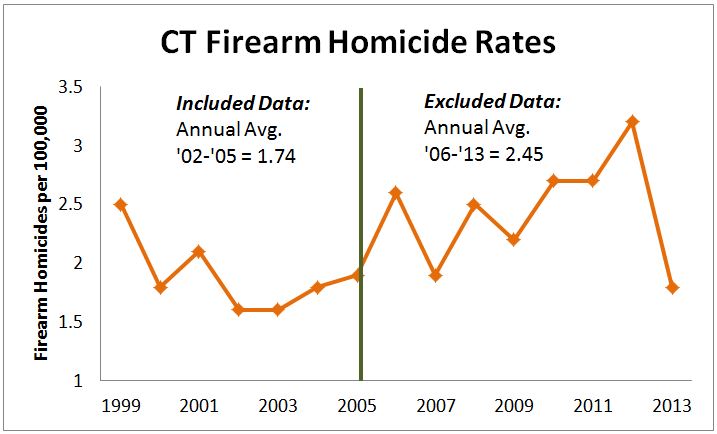 And this is just the tip of the iceberg when it comes to questions raised by this study. Considering the new law raised the legal age for handgun purchases from 18 to 21, why did the authors not use police arrest data to analyze the rate among 18-20 year olds, where the effect should have been especially strong?

Also, why did the authors not test their findings by using a different, well-established way of estimating what FHRs would have been absent the law by simply using Connecticut’s own pre-1995 trends to forecast post-1995 rates? Perhaps because this would have indicated that CT was going to experience substantial rate drops after 1995 regardless of whether they revised their gun laws?

And how could the authors ignore the trend visible in their study that shows the rate decline had already begun two years before the law was enacted in October 1995 and actually continues declining at roughly the same rate as before the law? Unlike Connecticut’s tax increases, the effect of gun control laws cannot be retroactive.

When choosing states with which to compare Connecticut, the authors excluded from consideration any states that already had a permit-to-purchase law in 1995, guaranteeing that the states most similar to Connecticut were systematically disqualified from consideration as controls.  As a result of this arbitrary decision, the authors included as controls states places as socially and culturally different from Connecticut as Nevada, and California, while excluding far more similar nearby states like Massachusetts, New York, and New Jersey. And as noted in a Reason Foundation blog pointing out even more problems with the study, one local state that was used as a control, Rhode Island, appears to be an outlier in the sense that FHRs rose during this period.

Even with this in mind, the study shows that the all of the control states also followed the trend for real Connecticut, suggesting a broader national trend not driven by state law.

The data clearly show that Connecticut’s FHRs declined after 1995, and the reduction may even have been proportionally larger than reductions in other states, but nothing in the authors’ methods allows them to determine whether the new law was responsible for any of the reduction. This study is nothing but another weak Bloomberg-funded argument for more gun control.