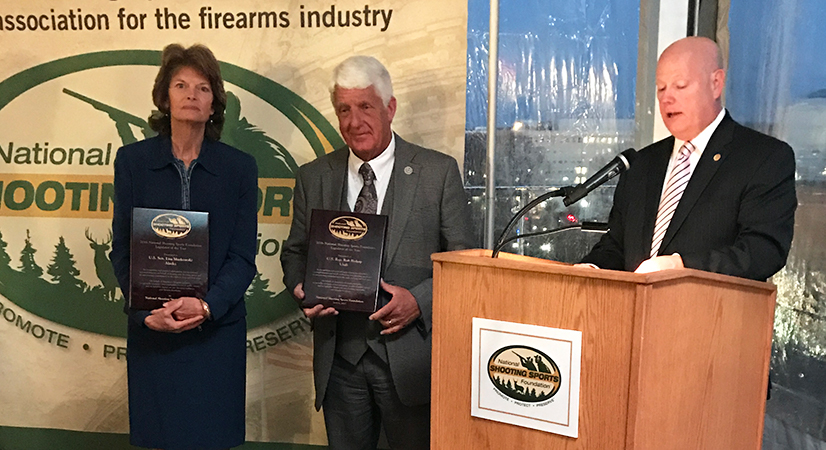 “We salute Chairman Murkowski for her outstanding leadership in the U.S. Senate and on the Energy and Natural Resources Committee particularly for her tireless efforts to advance S. 405, the Bipartisan Sportsmen’s Act and we are honored to present her with the 2016 NSSF’s Legislator of the Year Award,” said Lawrence G. Keane, NSSF Senior Vice President and General Counsel. “This legislation addressed many priorities for American hunters, anglers and recreational shooters and its passage by the Senate represented a significant accomplishment for the sportsmen’s community and for America.”

This historic legislation was the most important package of measures for the benefit of sportsmen in a generation. The legislation contained three of NSSF’s top priorities for the 114th Congress, including Target Practice and Marksmanship Training Support, Recreational Fishing and Hunting Heritage and Opportunities and Making Public Lands Public.

This vital piece of legislation included provisions for state fish and game agencies to exercise more flexibility to use Pittman-Robertson funds to build and maintain badly needed public shooting ranges. It also intended to help facilitate and provide for more access to Bureau of Land Management and U.S. Forest Service lands and waters for hunting, fishing and recreational shooting.

NSSF, along with a number of partner organizations, worked closely with senators to ensure inclusion of these priorities. Senator Murkowski’s steady leadership in shepherding this legislation was crucial in ensuring the Congress kept faith with sportsmen, hunters and recreational target shooters.

That sustained commitment continues. Senator Murkowski, along with a group of bipartisan senators, reintroduced S. 733, the Sportsmen’s Act of 2017, which was approved out of the Senate Energy and Natural Resources Committee less than a week after introduction.

“I am truly honored to receive this award from the National Shooting Sports Foundation,” said Senator Murkowski. “Ensuring access to our public lands and keeping them open for hunting, fishing and recreational shooting now and for generations to come is one of my top legislative priorities. With our sportsmen’s bill already passing committee on a bipartisan basis in this new Congress, I am hopeful that 2017 will finally be the year that it is signed into law, to the benefit of Alaskans and millions of sportsmen and women across the country.”

“We salute Chairman Bishop for his outstanding leadership in the U.S. House of Representatives and on the Committee on Natural Resources, particularly for his tireless efforts to advance H.R. 2406, the SHARE Act, and we are honored to present him with the 2016 NSSF Legislator of the Year Award,” said Lawrence G. Keane. “The House passage of the SHARE Act aimed to ensure that our nation’s outdoor traditions are preserved, protected and promoted. This bipartisan legislation addressed many key priorities for American hunters and recreational shooters and its passage by the House represents a significant accomplishment for the sportsmen’s community and for America.”

The SHARE Act included a number of legislative priorities, including provisions that intended to protect the use of traditional ammunition and fishing tackle by hunters and anglers, as well as provided greater flexibility for states to use Pittman-Robertson funds to construct and maintain public shooting ranges as well as facilitate greater access to Federal lands and waters for hunting, fishing and recreational shooting.

In addition, the legislation included a common-sense provision that would have allowed for the adoption of state laws on water resources development projects administered by the Corps of Engineers. Finally, the legislation permanently authorized the Wildlife and Hunting Heritage Conservation Council Advisory Committee to advise the Secretaries of the Interior and Agriculture on wildlife and habitat conservation, hunting and recreational shooting.

NSSF, along with a number of partner organizations, worked closely with House members to ensure inclusion of these priorities and ultimately, passage out of the House of Representatives. Representative Bishop’s steady leadership in shepherding this legislation was crucial in ensuring the Congress kept faith with sportsmen, hunters and recreational target shooters.

“When I am no longer a member of Congress, I want to look back and say that I left Washington, D.C., less powerful than I found it,” Chairman Bishop said. “Our efforts with the SHARE Act and other legislation were designed to accomplish that goal. Federal agencies too often arbitrarily restrict access to public lands. It is for Congress and the states to ensure that hunters, anglers, and shooters are able to count on reliable access to the lands they enjoy.”