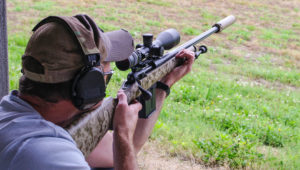 It is going to be a bitter pill for gun critics to swallow. Doctors for Responsible Gun Ownership just published a white paper saying suppressors are the best medicine to prevent hearing loss from the sound of gunfire.

This puts to rest the bogus claim from the Americans for Responsible Solutions that foam earplugs are the best way to protect hearing. That now thoroughly debunked claim, tweeted out as a “fact,” by the group led by former Rep. Gabrielle Giffords, earned three Pinnochios from the Washington Post’s Fact Checker column.

Here are the facts straight from the guys in the white coats who actually went to medical school and who are able to draw medical conclusions based upon peer-reviewed scientific evidence.

This is why these doctors support passage of the Hearing Protection Act of 2017, introduced in the House of Representatives as H.R. 367 and in the Senate as S. 59. They cited evidence of instant and permanent hearing loss reported by government and military researchers, as well as in medical journals.

The bottom line is this: The sound of gunfire is 140 to more than 170 decibels, loud enough to cause instant and permanent hearing loss. Stuffing in foam ear plugs helps, but only to the tune of 20-30 decibels, still louder than a car horn from three feet away and enough to cause damage.

Suppressors commonly reduce gunfire noise by 30 decibels, but also they also have a greater ability to reduce the impulse pressure associated with noise to below the 140 decibel threshold, where instant damage occurs. This is why not just these doctors, but also the Centers for Disease Control and Prevention concluded that suppressors are the only effective method for noise control when it comes to gunfire.

It’s time to tune out the false claims coming from the gun control crowd who apparently support hearing loss. Congress should listen to the doctors’ advice and pass the Hearing Protection Act. Pass two bills and call these doctors in the morning.