Project ChildSafe is About Safety, Not Politics – and Yet … 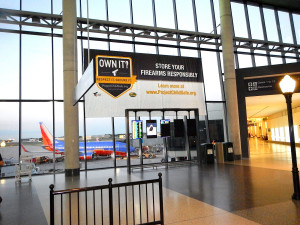 Project ChildSafe, run by the National Shooting Sports Foundation, is the firearms industry’s longstanding program to promote safe firearms storage. Since 2003, Project ChildSafe has partnered with law enforcement agencies in all 50 states to distribute more than 36 million safety kits, including cable-style locks. Now funded solely by the firearms industry and charitable donations from the public, the program in its early days was backed by a federal grant.

Project ChildSafe is not all that controversial. Even as anti-gun organizations appropriate the term “gun safety” for their own purposes, they have had trouble finding fault with what is a true gun safety program and are largely silent about it. As this was being written, we received word that the State of Utah has selected Project ChildSafe to provide some 30,000 of our kits per year for a three-to-four year program to groups that teach gun safety, health care providers and school districts.

Project ChildSafe Works. So in another way to reach out and inform the public, this year and next, travelers through some of our nation’s airports either have or will be seeing electronic and fixed advertising to promote the Project ChildSafe “Own It? Respect it. Secure it.” message. That is, travelers through all airports except for Reagan National Airport serving Washington. D.C. will be seeing these public service ads.

Five other airports have accepted or already run the ads – Hartford-Springfield, Las Vegas, Little Rock, Providence and St. Louis. But not Reagan National. Here, in the airport serving the nation’s capital, what had been routine purchasing of ad space for public service advertising ran into, you guessed it, politics. Said a knowledgeable person who tried to help this process along,   “DC is a very political market and this is not something they want to be involved in. We tried every angle we could but they did not want to accommodate.”

Reagan National is administered by the Metropolitan Washington Airports Authority, whose board is composed of political appointees. Calls to the Authority to even find the right person to talk with were unreturned. Remember, we only set out to buy some airport ads – the same ones five other airports accepted. Are we encountering a lack of transparency or accountability? We have a lot of collective experience with government agencies and it sure looks that way to us. And we’re not the only ones to think so.

The U.S. House of Representatives Appropriations Committee in report language for the Transportation, Treasury, Housing and Urban Development (it’s called TTHUD, in Capitol Hill parlance) noted: “The Committee has continuing concerns about the lack of oversight of the Metropolitan Washington Airport Authority (MWAA). A recent investigation by the DOT Inspector General (IG) found a number of cases of questionable sole source contracting practices, a lack of ethical disclosure requirements for board members, and an overall lack of accountability and transparency.”

We are committed to Project ChildSafe. We have a good number of organizations and companies that support us. Congressmen and Senators from both sides of the aisle, mayors and police chiefs have held public events across the country to bring public attention to the important issue of securing firearms in the home. The media cover these events.

So why can’t we run some public service ads for a few days at Reagan Washington National Airport? Why does politics come before safety? That’s only partially a rhetorical question. Not that we really expect an answer, we would still like to know.