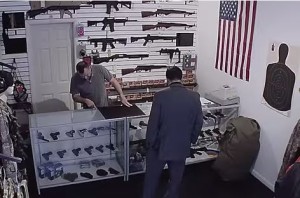 As is the case with so many of the efforts we see from the gun control lobby, the video recently produced by one of Madison Avenue’s best known agencies for the astro-turf States United to Prevent Gun Violence will appeal mostly to those already on the anti-gun side of the national debate. It’s theater for a select audience.

To set the stage, Grey Advertising built a fake gun store in New York City that came close but that didn’t look quite right.  Few among us in the industry or even most of our customers would not have concluded that something was amiss. But it was close enough for advertising agency work, so, a hidden camera was used to capture how supposed first-time gun buyers reacted when confronted with the “dangerous histories” of the guns available for sale. We’re told they were prop guns. No sales were completed. No suggestions of background checks were ever made, any established safeguard not being the point.

Actual gun ownership is highly restricted in the Big Apple, as we all know, and there is only one federally licensed retailer in the city, catering almost exclusively to law enforcement. So the sudden appearance of a new gun store must have struck many passersby as odd.

As for the prop guns, after New York’s SAFE Act was hastily passed, there was consternation that television and film productions using them could be affected by the broadly written law. No legislative fix was ever made in Albany. And New York City operates with its own rules for such things, a love for show biz and production company dollars being well understood. We are surmising that real actors plus non-operating guns, minus selective enforcement, equals no arrests for this kind of play-acting.

Grey Advertising said it received permission through the mayor’s office to pull off this two-day stunt, but imagine if a pro-gun organization wanted to run a similar exercise to present factual information on how guns are used successfully in self-defense many thousands of time a year across the country, or even how to safely secure legally-owned firearms. You can bet that either effort would have been nipped in the bud.

Let’s also consider that in New York City it’s illegal to sell toy guns, unless they are in bright, neon colors, as legal scholar David Hardy points out. In fact, over the past seven years, city officials have seized more than 7,200 illegal toy guns from stores and collected $2.4 million in fines.  But very real-looking prop guns are OK, apparently even if some of the ones hung on the wall of the fake store are now illegally configured for the Empire State.

But it gets better. The actor hired to play the salesman in the video is Ned Luke, who is best known for his portrayal of a violent criminal in Grand Theft Auto V. That video game features a vast array of guns used in the murder and mayhem for which the Grand Theft Auto game franchise is justly infamous. Who better to play a gun store owner?  The play’s the thing.

But while this way-off Broadway production was being staged, something that really deserves attention was happening, that is if you’re really interested in public safety.  Murders and non-fatal shootings in New York City are both up an alarming 20 percent for the first two months of 2015. This criminal activity was concentrated in certain precincts and police are responding. The guns used in the crimes will have been illegally obtained, of course.  But let’s not focus on criminal misuse of guns, the playwright calls for the discouragement, better yet the public shaming, of law-abiding citizens (or at least actors, agency employees or the hapless and curious who wandered onto the set) who would even deign to consider the purchase of a firearm.

So, while a gun control group has produced and then promotes a video supposedly for an audience of first-time gun buyers, they in reality wrote a screenplay for themselves, one that follows the preferred, worn narrative that all gun ownership is bad. This script may appeal to a small audience from the Upper West Side and in other elite neighborhoods not in flyover country, but we’re certain it will never play in Peoria.