Gorsuch Sticks to His Guns, Proves His Legal Acumen and Affirms Heller 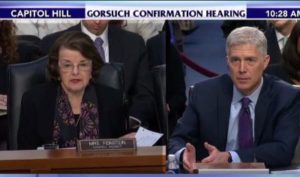 Judge Neil Gorsuch gave America a glimpse of the sort of Supreme Court justice he would be, in his testimony during his confirmation hearings before the Senate Judiciary Committee this week. His nomination will now go to the full Senate.

Neil Gorsuch is bold, principled, prepared and most importantly, a zealous adherent to the concept of originalism. That’s good news for America’s Second Amendment and American gun owners.

Judge Gorsuch endured marathon questioning in three days of hearings before the Judiciary Committee where early on, he was asked by Sen. Dianne Feinstein (D-Calif.) whether or not the Second Amendment was unlimited and if it was ambiguous. Judge Gorsuch didn’t take the bait. Instead, he demonstrated that he is, has been and will continue to be an unrelenting student of the law.

Sen. Feinstein questioned Judge Gorsuch on his views on the District of Columbia. v. Heller, the landmark 2008 decision establishing firearms ownership as an individual right. She quoted Justice Antonin Scalia’s majority opinion that noted the Second Amendment is subject to regulation and posed the question, “Do you agree with that statement that under the Second Amendment weapons that are most useful in military service, M-16 rifles, and the like, may be banned?”

Judge Gorsuch’s answer showed that he wasn’t viewing law through the lens of personal opinion. Rather, he would apply legal statue and precedent as guiding principles.

“Heller makes clear the standard that we judges are supposed to apply,” he answered. “The question is whether it’s a gun in common use for self-defense and that may be subject to reasonable regulation. That’s the test as I understand it. There’s lots of ongoing litigation about which weapons qualify under those standards and I can’t prejudge that litigation.”

Sen. Feinstein wasn’t done. She pressed Judge Gorsuch on whether he agreed with Justice Scalia.

“Whatever’s in Heller is the law, and I follow the law,” Gorsuch said, adding, “It is not a matter of agreeing or disagreeing, senator, respectfully, it’s a matter of it being the law and my job is to apply and enforce the law.”

Judge Gorsuch was right. He knew there are cases likely to be brought to him when he’s sitting on the bench, most likely Kolbe v. Hogan, in which the Fourth U.S. Circuit Court of Appeals upheld a 2013 Maryland law that banned modern sporting rifles and standard capacity magazines.

Sen. Feinstein pressed further, essentially asking Judge Gorsuch to render an opinion on the case even before it was posed to the Supreme Court. Sen. Feinstein cited Judge Harvie Wilkinson’s opinion that the Second Amendment is ambiguous.

Judge Gorsuch, though, was clear. “Heller is the law of the land.”

The teeth-gnashing and hand-wringing by the opposition to Judge Gorsuch isn’t over. Senate Minority Leader Chuck Schumer (D-N.Y.) announced he would follow through on his threat of a filibuster when Judge Gorsuch’s nomination comes to the Senate floor for a vote. This would set up a move by Senate Majority Leader Mitch McConnell (R-Ky.) to invoke the “nuclear option,” lowering the vote count a filibuster-proof 60 votes to a simple majority. It was the same procedure Sen. Schumer previously championed to appoint lower-level judges.

The Senate Judiciary Committee is slated to vote April 3 and a full Senate vote on Judge Gorsuch could follow in early April. Urge your senators to vote for Judge Gorsuch. He’s the justice the Supreme Court and America needs – one who is wedded to the law.