On the fourth day of spring, several staff members from the National Shooting Sports Foundation joined biologists from the U.S. Fish and Wildlife Service and the Connecticut Department of Energy and Environmental Protection to see conservation science in action through the state’s black bear project.

We met Tom Decker and Richard Zane, wildlife biologists stationed in the USFWS Northeast Region, at the Sessions Woods Wildlife Management Area in rural Burlington, Conn., about an hour’s drive from NSSF’s headquarters. Decker and Zane’s responsibilities include monitoring wildlife projects in 13 states, from Maine to Virginia. We also were introduced to Paul Rego, veteran Connecticut DEEP furbearer biologist. While Rego educated us about black bears in the state, his team prepared for a day of field science involving a 215-pound sow and her three cubs.

Our invitation to view the bear project is part of a plan by Decker and his colleagues to enhance understanding by industry and the public of the relatively unknown and underappreciated work conducted by state wildlife agencies to conserve species and habitat. Such projects are ongoing not just in Connecticut and the Northeast but throughout the country.

The science, vital to health of wildlife, is paid for by Wildlife and Sport Fish Restoration (WSFR) funds, which are the result of excise taxes on the sale of firearms, ammunition, archery and fishing equipment, and motorboat fuel. Collected by manufacturers and paid to the federal government, these funds are apportioned annually to state wildlife agencies for conservation-related initiatives. In 2013, $863 million was generated by firearms and ammunition sales alone.

The excise tax on firearms and ammunition—10 percent on long guns and ammunition and 11 percent on handguns—was put in place in 1937 through the Federal Aid in Wildlife Restoration Act, also known as the Pittman-Robertson Act for the bill’s sponsors, Senator Key Pittman and Representative Willis Robertson. (The Dingell-Johnson Act of 1950 created a similar tax to benefit the management and restoration of sport fish.)

The funds are restricted for use only by state fish and wildlife agencies so that conservation projects can be conducted over extended periods, without interruption due to budget cuts or political pressure. Funds also are used to manage hunter education and shooting sports programs, essential elements that keep the WSFR cycle running.

Everyone who benefits from this system—hunters, bird watchers, nature lovers and scientists—should be thankful for the hands-off policy that protects these conservation funds, which are often ogled for re-direction by politicians in cash-strapped states.

A Sow and Her Cubs 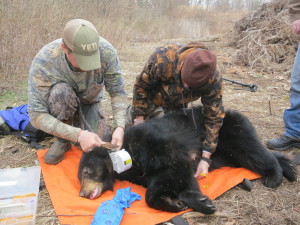 The sow, known as H1, and her cubs likely hadn’t been out of their den since the cubs were born, probably in January, according to Rego.

H1 was wearing a $2,500 GPS collar, allowing the biologists to locate her in, of all places, a refuse transfer station in Avon, a nearby affluent town. Once we entered the landfill and saw the den site, it was easy to appreciate H1’s choice of winter lodging. She made her den in a large brush pile that had been pushed to a height of about 12 feet by refuse station machinery.

Surrounding the landfill were woods. The trees were bare and homes could be seen in the distance.

Monitoring bears in Connecticut and elsewhere serves many purposes. It allows for collecting information related to survival and reproduction, population fluctuation, and, as happens, locating and dealing with problem bears—usually young males who range widely, sometimes creating mischief in backyards by turning over bird feeders and barbecue grills.

H1 was anesthetized by a DEEP biologist, who used a 10-foot-long pole to deliver a tranquilizer-carrying syringe, while two members of the team served as backup with dart guns (a rifle and air pistol). The biologists removed the cubs and H1 from the den. Then out came the clipboards, syringes and vials. The team took body measurements and blood samples, tagged the cubs’ ears and changed H1’s GPS collar so it would broadcast a locating signal for another two years.

“Projects like the Connecticut DEEP black bear project are being conducted in eight Northeastern states,” said Decker. “Wildlife and fish departments use the information collected to write statewide management plans, make decisions about habitat available for bears, make recommendations on bear population levels and monitor the harvest of bears through regulated hunting seasons.”

Hunting is a wildlife management tool that is used to control growing populations and helps prevent human-bear conflicts. When seasons are proposed for high-profile species like bears, passions can run high, as recently seen in New Jersey and Florida, where regulated hunts were deemed necessary and ultimately approved despite vigorous objections. When such issues are intensely debated, science-based decision-making often carries the day.

In Connecticut, where the bear population is rapidly growing, there currently is no bear hunting season.

The Cost of Science 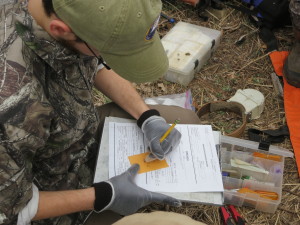 Conservation science doesn’t come cheap. You can easily see that if it weren’t for WSFR’s dedicated funds that long-term projects might easily be trimmed or cut altogether. In New Hampshire and Maine, for instance, projects investigating the survival of moose, whose populations are in decline, can span three years of field study and cost $1 million in total. In Colorado, Parks and Wildlife biologists are studying the effects of energy development on mule deer populations. The 10-year project, now in its eighth year, costs approximately $500,000 annually and will bring important scientific information for applied management decisions regarding mule deer in the state.

During our day afield, we learned that all the equipment used by the biologists, including the Chevrolet Silverado pickup, a percentage of the biologists’ salaries, GPS collars, tranquilizer drugs, dart guns, medical equipment and more, was paid for by sportsmen and industry dollars through Wildlife and Sport Fish Restoration funds.

It is a funding source that is irreplaceable. And so are the results it produces.

“The collection of this scientific information and the application and decisions it allows state wildlife managers to make would not be possible without this source of funding,” said Decker. “It is a system that is envied by wildlife managers from other countries. We want to help folks in the U.S. who are the source of these funds to be aware of the excellent work that is done in each state.” 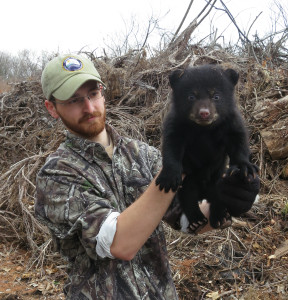 Now about those cute cubs. With their big wide eyes, incredibly soft fur, inquisitive nature (and despite sharp claws), the cubs are irresistible, even to biologists who see them on a regular basis. Rego said that sometimes when TV crews accompany DEEP biologists on field days, the cubs often get the lion’s share of news coverage. That’s understandable, said Rego, but he stressed that no one should forget the importance of the science that is being done.

“Biologists see annual cub births as the fuel for bear population growth and as future wildlife management challenges,” Rego explained. “In a few years these cubs may weigh several hundred pounds. They will likely create unease among homeowners, parents and pet owners. They will be capable of attacking pets, upending beehives and killing livestock.”

Switching to the long view, Rego said he often thinks of the vast amount of accumulated research, knowledge and experience that benefits those engaged in wildlife management today. “How much would we know about so many wildlife species if research projects that were wholly or partially funded by WSFR funds hadn’t taken place?” he wondered.

The day’s work added to that stockpile of knowledge. Said Decker, “All parties should be proud of sound scientific work conducted under these projects and the application of this information in the conservation of wildlife in their state. It is a legacy to future generations.”

Decker would like to arrange other field trips so industry representatives can see first-hand the projects that fish and wildlife agencies are conducting with the support of WSFR funds. He notes that all participants benefit. “As much as we want industry and the public to better understand what we do, we also want WSFR staff to better understand the firearm and archery manufacturers’ worlds and their longstanding funding source of these important projects.”

And there is no better way to appreciate conservation than seeing it in action in the field.