The FBI released its annual Uniform Crime Report (UCR) today, showing a 3.3 percent decrease in the national crime rate for 2017. This is the 15th consecutive year of crime rates dropping. Homicides overall declined in 2017, with firearm-related homicides dropping slightly more than total homicides. It is always good news when crime declines. As the trade association for the firearms industry, we are committed to programs to prevent access to firearms by criminals and other unauthorized individuals. We know these programs and initiatives work. We also know that the Clinton-era ban on modern sporting rifles, inaccurately tagged as “assault weapons,” did not work.

Looking at the data in the UCR, it is clear why banning certain firearms based on cosmetic features will not prevent crime. According to the chart below, we would be better off banning knives, hands and feet, and hammers. 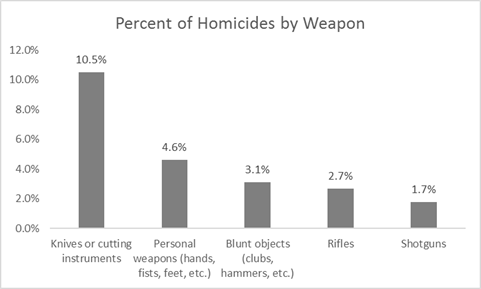 While data from 2017 may feel like old news, a report out last week previews a similar picture of declining crime rates for 2018. Despite the lack of any new gun control laws in most states, this report found that in 19 major cities, crime rates and homicide rates are dropping. The preliminary data from the report “Crime and Murder in 2018: A Preliminary Analysis,” show that crime in 2018 appears to be dropping back to the historical downward trend. This comes after slight increases in the murder rate during 2015 and 2016, which suggests these two years were outliers in an overall larger decline in crime nationwide.

The findings certainly suggest that, despite new firearms being sold every day to law-abiding citizens, there is no crime spike under way. In 2018, the data suggest the murder rate in these cities will be 7.6 percent lower than in 2017. According to the report, this is “approximately equal to 2015’s rate, near the bottom of the historic post-1990 decline.” The Brennan Center, a left-leaning think tank at the New York University School of Law, notes that this is preliminary data that will be updated in later reports, but states that it has correctly estimated the direction and magnitude of changes in major city crime rates in the past.