Buy Early and Often — Handling Inventory in 2016, an Interview with Sierra Bullets 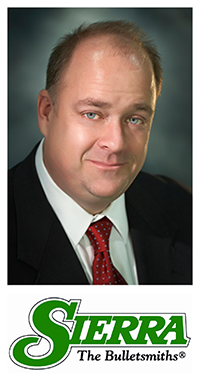 Continuing our series of interviews with manufacturers and retailers and how they’re handling a hectic sales year, I recently spoke with Pat Daly, President of Sierra Bullets, about what they’re doing to keep inventory levels appropriate to the times and retailers happy. Here’s what Pat had to say.

Pat Daly (PD): We’re forecasting pretty strong sales for the retail side. Right now, in February, though, we’re in a wait-and-see mode, keeping an eye on the political climate. Still, we had a surprisingly strong final quarter in 2015 and a strong start to the first quarter of 2016, so regardless of the outcome of the 2016 elections, indicators are it’s going to be a good year—how good will depend on how the elections shake out.

NSSF: What advice do you have for our retailers regarding their inventory levels this year?

PD: Sierra has terrific inventory levels right now. Given our sales last quarter and currently, we’ve increased our in-house product levels significantly and across the board, meaning all our offerings are at increased carry capacities. That means our retailers should be able to find the bullets they want at the inventory levels they need. That said, if buying starts to get frantic on the consumer end of things, I’d encourage retailers to buy early and often. After the industry got caught off-guard with the huge spike in demand in 2013, Sierra implemented surge capacity processes—production processes that allow us to better meet sudden and exacerbated increases in demand. This really improved our ability to open up production in times of need. Additionally, we’ve made the monetary investment of increasing our finished goods inventory to better service Sierra’s customers.   That decision was based on demand over the last five or six months and what we anticipate may come with the November elections.

NSSF: If you were running a retail store, what strategies would you employ to secure inventory?

PD: I think I’d be talking to my distributor and talking to them often. When we see inventory moving, we hope the retailers are realizing the same thing, that they see the forest for the trees and understand that increased sales may not be specific to them, rather that it’s likely happening to all retailers. That means retailers need to get in touch and stay in regular contact with those distributors who are in communication with many people across the market so that they have a realistic grip on the market both as it relates to them and on a whole. And we want to know what our retailers are experiencing. Retail feedback is extremely important to us. It’s crucial to us finding ways to work with and respond appropriately to what’s going on out there in the consumer marketplace.

NSSF: If a retailer has questions about their supply of Sierra bullets, what should they do and who should they contact?

PD: Again, retailers this year need to be in regular contact with their distributors, or their Sierra sales rep if they buy direct, so they’ve got a picture of what’s going on in the market beyond their own doors and so they have a realistic idea of what we have on hand and in what quantities.

“Realistic” is the key word here, and that same word also apples to ordering.  We once had a customer say during the last big buying surge that he’d take everything we could produce in one month. While we appreciated the sincerity behind that, we had to explain to him that we couldn’t do that, and that everybody has to have access to our inventory. While orders are filled on a first-come,first-served basis, Sierra wants our overall distribution to be as fair as possible because that serves the consumers better.

By the way, this is how it works with most of our industry’s manufacturers. We want our retailers to place realistic orders, even in panic-buying times. Of course, during those times of increased sales, it’s okay to order more than usual, but it’s important for retailers to keep in mind that it’s very possible to overdo it. No one retailer can corner the market or order so much that their competitors are left without inventory, so it’s not wise to try to go there.

I’d like to extend my thanks to Pat for his time. We wish you and Sierra Bullets much success in 2016—it sounds like you are poised for a great year! To our readers, we hope you’ll check in often here on the NSSF blog, as we’ll have more interviews with key industry leaders, top retailers and distributors to come in the weeks ahead.