In my last article, I talked about ways to spot those persons who enter your store with less than honorable intentions. Identifying suspicious and off-beat behavior is the first step in working to stop a criminal act in your store while you’re open for business, but let’s build on that and talk about the other things you as an FFL retailer should do to not only prevent burglaries at your place of business, but also avoid becoming a target for an after-hours break-in.

Burglars typically operate at night, after the work day for most is done and people are home asleep. Experience also shows that most retail burglaries occur on weekend evenings and early mornings as well as over holiday shutdowns. Therefore it’s up to you to implement a number of best security practices aimed at preventing your business from being burglarized after you lock up and leave. Let’s take a look at how to do that.

To start with, let’s define exactly what a burglary is. A burglary is any unlawful entry to commit a felony or other criminal act, even though no force was used to gain entrance. When it comes to burglary of gun dealers, a crime that is costly and disruptive, there are indications these crimes are increasing. Even worse, many recent cases publicized in the media have told of gun dealers being burglarized more than once within the same month. More concerning is the fact that few burglars are actually caught—almost 80 percent of all burglaries go unsolved. Police prevention and detection are difficult because of a lack of witnesses and evidence that can confirm criminal identity.

So what steps should you take to make your place of business a hard target for burglary? There are several precautions to consider including:

While employing all of these is likely not practical for most stores, a combination of these safeguards will provide an improved level of security for your business. Which ones are right for you? Let’s take a look at some of the details.

The first question you should ask when assembling a burglary-prevention system is, “Is your retail location located in an area that’s actually prone to theft and pilferage by burglars in criminal activity?” The answer to that question may help determine how many layers of protection you need, but don’t be fooled. Even gun shops in the best of neighborhoods have become victims of remotely located burglar teams. Every FFL needs to have some level of burglary-prevention measures in place.

A term you should become familiar with in beginning your security measure assessment is “target hardening.” This requires assessing the vulnerabilities in your store, then adding different and appropriate layers of protection based on location, demographics, local crime statistics and accessibility. The harder you make it for criminals to succeed, the better your odds of deterring a break-in. Installing steel and concrete bollards or large, heavy, decorative planters or boulders in front of a gun shop entry can easily deter and thwart a would-be burglary attempt. Second to installing physical barriers, roll down security gates or grills also provide superior protection against smash-and-grab burglaries and drive-through attempts. There’s surely a trade-off between security gating and a great looking store, but society understands and respects the need to protect firearms after hours. 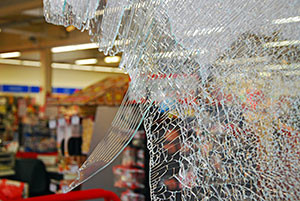 Security film and laminated glass are two other considerations. Laminated glass, constructed with a sheet of invisible plastic compressed between two sheets of glass, in particular has a high tensile strength. It mounts like ordinary glass and is available in clear, tinted and opaque styles. Laminated glass will break into sections when beaten with a hammer, rock or bat, but will stay in place and not shatter. In many cases where a laminated security window is in place or glass film has been properly applied, thieves have made arduous attempts to smash through windows and been utterly surprised by the fact that the glass won’t shatter and crumble to allow quick and easy entry.

Let’s address the issue of locks on front doors, side doors, rear doors and roof hatches. Under most standard insurance policies that cover burglaries, evidence of forced entry is generally necessary for you to collect against losses. But it’s not enough to put any old lock on your door and head home. You should have the right lock on your doors. Most experts advise the installation of six- and seven-pin tumbler-type locks or other adequately high-security mechanisms to prevent easy lock picking. Don’t penny pinch in this area! You’ll also need deadbolt locks for front doors, rear doors and stock room doors and, where permissible by building and fire code, a double cylinder deadlock with control from both sides of the door will help to prevent an easy smash of a glass door and reach in to unlock the door from the inside latch. Keep in mind that rear and side doors often include a fire exit panic device that permits only one-way egress. Although safe for people, these provide minimal after-hours safety for your inventory. Check with your local fire code to determine if you can install barricade locks or other burglary-resistant security bars on these exits when the premises are left unattended.

Key control is a critical area of concern that deserves extra attention. Not only should keys be changed for the locks when employees terminate, keys must also be changed out and locks rekeyed whenever keys are reported lost or stolen. To keep keys from falling into the wrong hands, issue as few keys as possible to supervisors and managers and record who has access to those keys issued. Numerically stamping issued keys is also a best practice. Maintain good records so that every key can be traced back to whom it was issued. Also, take specific care to control and secure the master key or control key that may be used to switch out cores on your lock cylinders; when setting up the key system for your store, it is advisable to have one key that operates all the interior locks, plus a separate key for the exterior lock cylinder that is issued only to managers and supervisors. Finally, periodically inventory all of the keys issue to your employees for accurate record keeping. 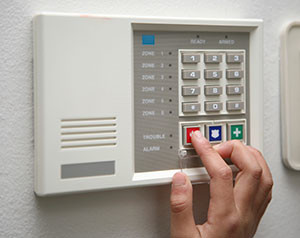 Burglar alarms are the next level of defense. Up for debate is whether alarms should be silent, notifying only the security company and police and fire, or to have audible alarms installed. My personal experience causes me to favor incredibly loud audible horns to “wake up the neighborhood” and, hopefully, scare off burglars. Since smash-and-grab-type burglaries are on the rise and such burglars are typically going to be in and out of your store as quickly as possible, to me it makes more sense to have audible horns and sirens where codes permit.

It is highly recommended that you discuss types of burglar alarms and specific system requirements with your insurance company before making any decision as to what to install. You should also research if your burglar alarm system can be connected directly with local police departments, although this practice is not common in larger cities. Almost all burglar alarm systems nowadays are connected to an alarm monitoring center otherwise known as the “central station,” where dispatchers work round-the-clock to monitor your alarm activity and take appropriate action when alarms are activated. For such systems, it is critical that your alarm call list is current and updated anytime key holders change. Key holders for your location must be keenly aware of their responsibilities in the event that they actually receive the alarm call after hours.

Aside from meeting your insurance company’s basic requirements, there are many options in security alarm devices that are best suited for your location. I’ll address those details in a future article, but basic requirements should include installing magnetic contacts and motion sensors on or near entry doors, roof hatches and windows. Motion sensors should also be installed to cover sensitive interior areas, and proximity alarms can be installed on gun safes where your most valuable inventory is stored.

That covers the most crucial parts of your store’s security, the basics of your alarm system and things you can do to improve the integrity of your locks. Next week I’ll pick up the conversation to talk about several other things you can do to keep you, your staff, your customers and your inventory safe.

You may also be interested in: Responding to a Burglary